Waaay back, before I had any kids, I had an idea to make a dress from the 18th century.

I started on a pair of stays inspired by the blog 'before the automobile', and drafted a pattern by modifying my victorian pattern an absurd amount. I am actually a little bit proud as it only took one mockup to get the fit.
However, I left the project unfinished at an unknown time (probably when I got pregnant) and it lived in the 'UFO' pile for a long while. 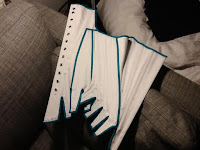 I finished the stays in the summer 2014, while I was on maternity leave. Why I do not remember, but at least I did it. Or, well. Almost. I didn't add the shoulder straps. But hey, they were wearable!

Then in the spring 2016 I turned 30, and as a present for myself I found a lovely striped silk. More like a duponi than a taffetta, but I absolutely loved it and wanted to make a 18th century dress inspired by the dress from sleepy hollow. 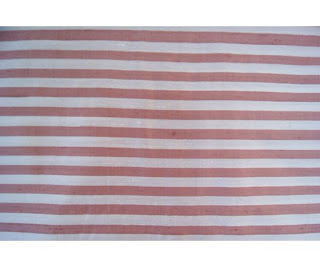 So I did a little research, and the combination was quite realistic! The project was a go! 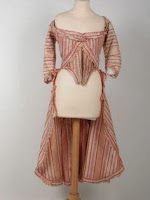 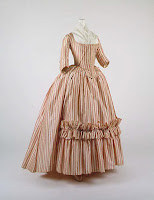 I made a few extra underpinnings in cotton, focusing not on authenticity but on getting the right shape. This was not for reenactment but just for the fun of it. 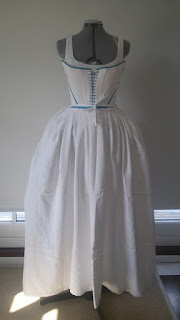 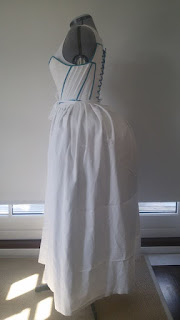 I ended up having to take the front center seam apart on the stays, -they were too tight over the bust, as I had gone up in bra size after having my son. I was missing a shift/underdress, ut all in all I had a pretty neat kit to give the right shape. So onwards to the actual dress!

I made a pattern for the top from Janet Arnolds patterns of fashion 1 page 40 (c. 1775-85 snowhill manor), and to my big surprise it fit without any alterations! However, to create the zone front effect, I did redraft my pattern a little. 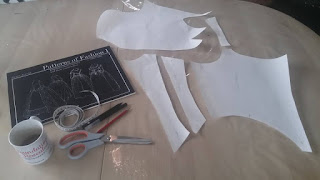 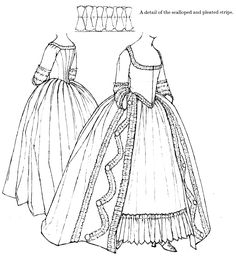 I made the lining first using a sewing machine, but then I added the silk layer by hand. It was great fun, and I used a good deal of time looking at other peoples blogs to learn about how to insert a sleeve and other nifty information. 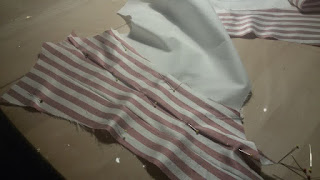 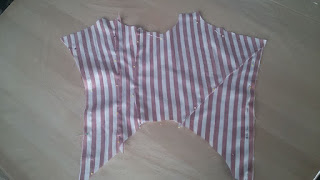 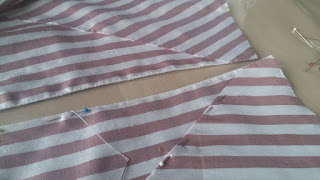 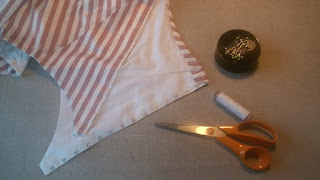 For the skirt I had to hand stitch two lengths of fabric together, as the stripes on the fabric ran the wrong way. I could not just use the mashine, as it turned out that the stribes had a slight variation in width, and thus would create a very visible seam where the stripes did not meet. 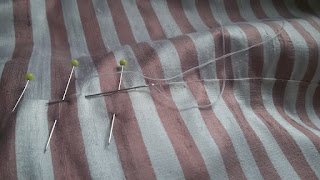 So with the dress sewed up, I put in hooks and eyelets and tried it on...

And it did not fit! I could not close it over the bust.
I thought that maybe it was the less forgiving silk that did not stretch as much as the cotton I had used for the mockup, but in reality it was the early signs of me being pregnant.

Planned? Yes.
Expected to happend this fast? No.
Did I realize it while I worked on the dress? Not a chance.

So I had to cut open the front and use the fake zone front as a base to put in a new piece that gave a little extra room for the bust.
Thankfully it worked. 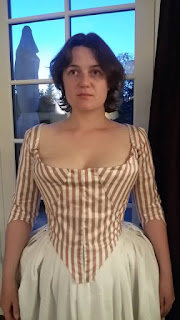 So now all I had to do was to add the trimming! 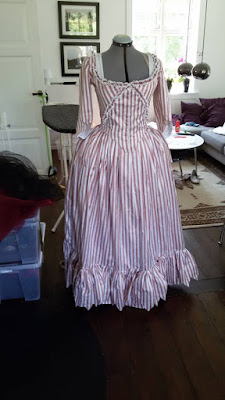 ....Aaaaand realize that my bust just kept growing, that my constant tiredness and slight nausea had a reason and that by now I could not fit the damn dress.

So yet again the project ended in the UFO pile, with half the trim attached and the overskirt not yet attached.
And this is where it sits right now, a year later, with the white peonys blooming (my private deadline for the dress back in the spring 2016)
However, while my bust still doesn't fit into the dress, I have a date with a photographer and a model later this summer so it just might be done soon.

So that is a large part of what I was doing during the long silence on this blog. Most of it has been described in Danish on my facebook page, but not in a coherent story. BTW, pop by the facebook page and have a look. I am much better at updating there, and there is quite a few smaller projects described there.
Indsendt af Mette kl. 22.30 4 kommentarer:

I have been busy with my life yet again, and besides from ordinary work and being a mother of one, I am now the mother of two.
However, I will try to update a little bit in the next few weeks, as I am currently sewing a lot.
Indsendt af Mette kl. 21.02 Ingen kommentarer:

Want to borrow a larger than life wardrobe?

I am currently offering photographers and models near Copenhagen the opportunity to borrow some of my costumes for photoshoots. The offer is primarily directed towards models and photographers that are already collaborating, and are missing that extra something for their alternative fashion shoot.


Pop by my wardrobe page, and see if any of the costumes matches a project you are working on. 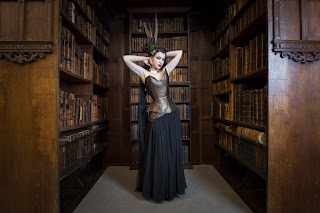 The corset pattern generator has been updated! 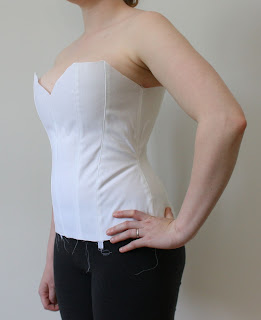 I just wanted to say, that I have updated the corset pattern generator, and you can find it in the sidebar to the right, together with a guide on how to take your measurements! 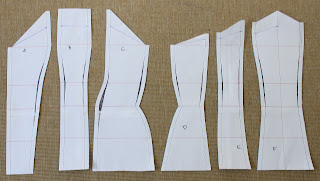 The corset pattern generator is here! 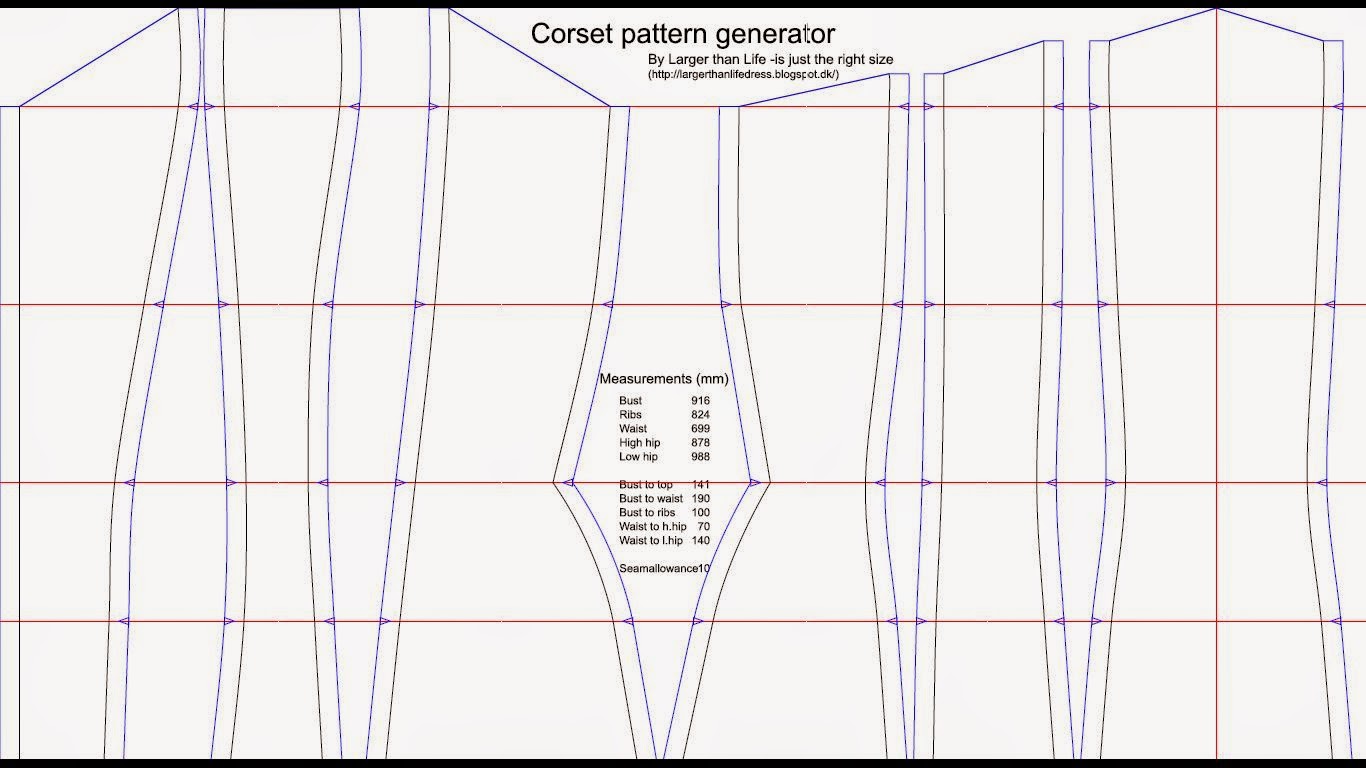 As I have told earlier, I have been fiddling with laser cutting, 3d printing and much more, at the local FABLAB.

Lately I was introduced to the program processing, that allows you to draw stuff using programming. This sounded very handy, and within 72 hours of leaning of its existing, I had made my first program, the corset pattern generator.
As FABLABs are based on sharing knowledge, I am sharing my program here (see the sidebar under Pages), and in an instructable. 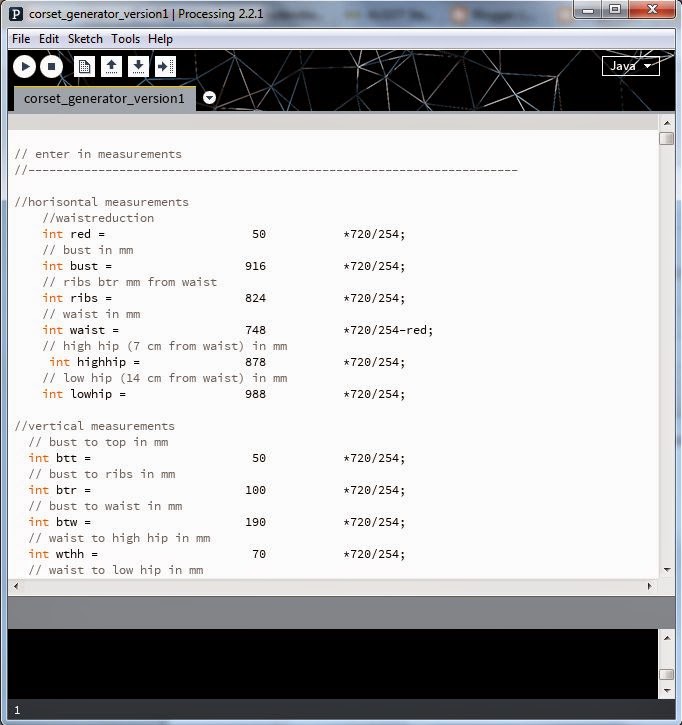 What is the corset pattern generator?
The generator is a small program, that allows you to enter in the measurements of a person, and then the program generates a pdf file with a custom corset pattern, ready to print, or put into a laser cutter.

What is it based on?
The generator is written in processing, that needs to be downloaded in order to run it.
The method of drafting is based on the free guide to making corset pattern from Foundations Revealed.

Can I use it for...
You are welcome to use the generator for private purposes as it is, but please refrain from commercial use (it is my personal corset pattern it is based on). I am planning to make a guide on how to modify the generator to produce other corset styles, and when that is done and up, you are most welcome to modify it, and generate your own patterns for commercial use.

So, what do you want in return?
Feedback!!! I love feedback!
What was good, what was bad (be polite), what are you missing, what are your experiences with it used in your size? Anything that I can use to make it better.

I will put up new versions as they develop, so do stick around and see what happends:)
Indsendt af Mette kl. 10.29 7 kommentarer:

A few people have asked how I get access to a lasercutter, and the answer is simple: FABLAB. Fablabs are fabrication laboratories, that allow normal people free access to high tech equipment like lasercutters, CNC cutters and 3D printers. There is a whole charter about it, but the main rules are:
As I am the only one at FABLAB RUC currently using the lasercutters for fabric it was thus natural to help the guys operating the Fablab in making an instruction video on how to cut fabric. 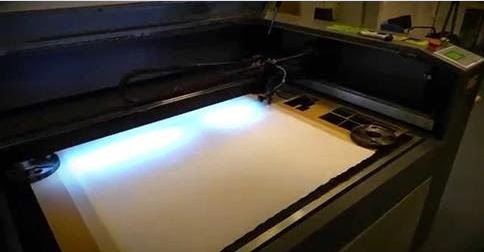 A step by step guide to a petticoat on instructables!

One of my last projects were this step by step guide to making a tulle petticoat for 50'ies dresses. I know I have posted one here a long time ago (in danish), but after I bought a pleating foot for my sewing machine it has become so much easier to make petticoats. I also started using my overlocker to treat the edges, giving a much less scratchy result.

So pop by and see my first instructable! 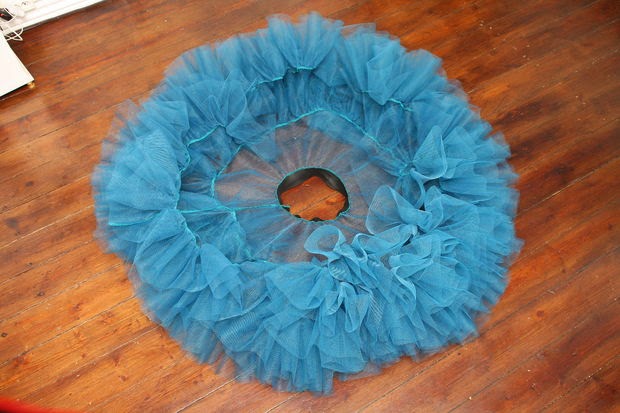 This is a blog on clothing.

Clothing that in no way are practical, in no way useful, and simply cannot be justified.
-Exept for that feeling you get of being larger than life


The blog is written by a Danish hobby seamstress, and focuses on the creative process of making different costumes, historic or merely modern over the top.